How Exactly Will Ending Saturday Mail Delivery Save Money? 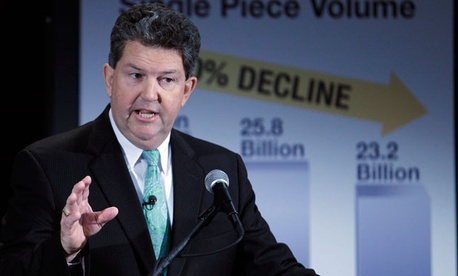 Two lawmakers have condemned the U.S. Postal Service for failing to respond to a request for more details on a schedule change that would end Saturday mail delivery. USPS said it has already provided adequate information.

On Jan. 31, Sen. Claire McCaskill, D-Mo., and Rep. Gerry Connolly, D-Va., sent a letter to Postmaster General Patrick Donahoe and the Postal Regulatory Commission to request a specific breakdown of savings from a proposal to reduce letter delivery to five days per week. In announcing the change, Donahoe said the service cut would save USPS $2 billion annually.

“Eliminating six-day delivery would impact families, small businesses and seniors in communities around the country -- it’s not responsible to move forward with this drastic plan without knowing if it would even make a substantial difference in dollars saved,” McCaskill said in a statement. “The Postal Service has the data we need, and it’s time for officials there to stop dragging their feet.”

McCaskill and Connolly received a response from PRC, which estimated the net savings to be about $1.7 billion, but the Chairwoman Ruth Goldway said the commission lacked necessary information from the Postal Service to make the most accurate assessment possible.

Goldway said the Postal Service has not accounted for the shifting of processing, transportation and delivery of mail from Saturday to Monday, which “called into question Postal Service expectations that existing Monday operations could successfully absorb the additional volume.”

Connolly suggested Congress will block the new schedule if lawmakers do not receive more information.

“The Postal Service has failed to deliver in responding to congressional requests in a timely and responsive manner,” he said in his statement. “The postmaster general demands that Congress quickly rubberstamp the elimination of Saturday mail delivery -- yet refuses to explain how cost-savings were calculated -- apparently expecting members to evaluate his policy proposal from press materials alone.”

A USPS spokesman rejected the lawmakers’ criticism, saying agency attorneys have met with Senate Homeland Security and Governmental Affairs and Appropriations Committees, as well as relevant House committees, and provided its legal brief to the committees’ chairs and ranking members. He added the Government Accountability Office plans to release a cost savings analysis of the proposed schedule change.

Why Mobile Trends are Reshaping the Federal Workforce

Preventing the Next Disaster

From street crime to terrorism to violent weather, the Homeland Security Department’s fusion centers piece together critical intelligence that can save lives.

Intruders can tap into vehicle systems to access cellphone calls, GPS signals—even the brakes—with no industry regulations in sight.