Congress Could Soon Deliver the Postal Service Its Biggest Blow Yet 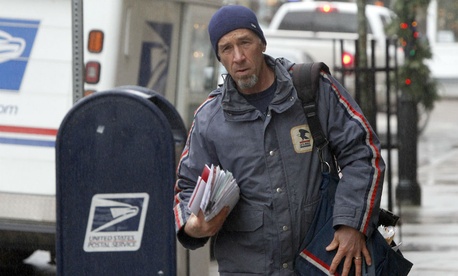 The U.S. Postal Service has had its fair share of gripes with Congress over the last several years.

From burdening it with required payment to prefund future retirees’ health benefits to blocking the closure of post offices and facilities to failing to pass comprehensive reform, postal management and lawmakers have often been at odds.

Congress has potentially found a new way to constrict USPS: hamstring the agency by taking away its ability to make any major decisions whatsoever.

In addition to the postmaster general and his deputy, any significant proposal affecting postal operations must be cleared by the agency’s board of governors. Of the nine presidentially appointed, Senate-confirmed positions, only four are currently filled.

Absent congressional action, that number will fall to three on Dec. 8, and the board will lose its voting quorum. Board Chairman Mickey Barnett, a Republican and former senator from New Mexico, will be forced to step aside next week. His term officially ended Dec. 8, 2013, but current law has allowed him to stay on for one extra year.

Because Postmaster General Patrick Donahoe and Deputy Postmaster General Ronald Stroman are counted as members of the governing board, six of the 11 positions are filled. If Barnett -- who President Obama has re-nominated -- is not confirmed by Dec. 8, the board will no longer have the majority it needs to approve anything.

Sen. Tom Carper, D-Del., chairman of the committee, has repeatedly sounded the alarm over the looming deadline.

If the Senate does not confirm the nominees, the board would not “be able to conduct business,” Carper said on the Senate floor last month. “At a time when the Postal Service is struggling to address a number of financial challenges and to adapt to the digital age, this would be an avoidable disaster.”

He added: “Today, because of our inability here in Congress to come to consensus on postal reform legislation, the Postal Service is just twisting in the wind, able to do only so much to address the financial challenges it faces and transform itself for the digital age. Customers are left with uncertainty, then, about what the future holds for the Postal Service. We would make that uncertainty even worse if Dec. 8th comes and goes and our five postal board nominees are still waiting for us to act.”

The Postal Service has also repeatedly called on Congress to act.

“We continue to be very concerned about the possibility of the lack of a quorum on the Board of Governors and urge the full Senate to take up the nominations,” said Dave Partenheimer, a postal spokesman.

With the deadline to fund government just three days after the board would lose its quorum, it is not hard to imagine why the postal board is on the backburner. However, if the Senate does not act before the legislative session ends later this month, Obama would have to re-nominate all the candidates. They would have to once again go through the committee process and USPS would be left without any decision-making ability indefinitely.

There are currently no formal plans to confirm any would-be governors in the next few days. When asked if the Dec. 8 deadline would be met, a Democratic Senate aide said he hoped “we can find agreement” to protect the quorum “this Congress.” An aide in Carper’s committee expressed confidence the “disaster” would, in fact, be avoided.

“Chairman Carper continues to urge his Senate colleagues to vote on the five bipartisan nominees to the Postal Board of Governors currently pending before the Senate,” the aide said. “He is optimistic that his colleagues will do the right thing and vote on the nominees before the Dec. 8.”

Making the Grade in Digital Government

Get the Next Generation of Government in Your Inbox

Innovation in Action Vol. 2 is Here!

Get the latest stories on groundbreaking advancements in state & local government.

How to Raise Your Agency's Energy I.Q.

Next Story
Powered by the Parse.ly Publisher Platform (P3).