Take two Dmtiri -- tried to post yesterday but your blog ate post. Firstly, thanks for the thoughtful post, and for engaging with the debate at all.
Now, if I can remember what I said yesterday, and this is still straight off the top of my head, the first point to make is that what happens to some poor soul in Mogadishu has no particular relevance to what happens to a woman writer in, say, Melbourne. In an ideal world it SHOULD, because we all know that rich western world has enough food and money to keep the poor 'third world' safe and fed and warm. However, geopolitics is a dirty hard game and we know that for as long as there have been men and women there have been good men and women fighting for a more equal world -- with mixed results. So, it is reductio ad absurdum to suggest that the life of a woman in Mogadishu has any bearing on the life of a lady writer in Melbourne. In other words, equating or linking one with the other is hardly useful, and makes no relevant point.
Secondly, your general argument that lady writers need no special pleading, well, it reminds me of the old fat farts of the ALP who were against equal representation. As a gay man you must know that part of the reason why gays have an easier life these days is because of those braves souls willing to fight for equality, those souls at Stonewall and at Gay Lib marches in the 70s. Sometimes under-represented folk need to shout loud, and sometimes the system DOES need changing.
Lastly, yes,Flannery O'Connor and Karen Blixen and all the other wonderful lady writers you mention. But these are regarded as MINOR, baby, and part of the cultural perception is that only male writers can be MAJOR. Who do we think of as America's contemporary greats? It's Updike and Roth and Franzen and Mailer and Bellow etc -- all WONDERFUL -- but what of Oates and Didion and Robinson and Phillips and Kingslover and many, many more. What is the system? Who is it that imparts value? Is it us?
Anyway, I dips me lid for your interest, and will write a longer response on my blog at www.abetterwoman.net
I get where you are coming from, certainly, but I just think perhaps there is a wider concept. Thankyou Dmtri!

Susan Johnson - couldn't agree with you more. On every point.
Dmetri - nice of you to join the conversation. Although perhaps if you'd gone back through ALL the history (as in blog posts and responses) that preceded the formation of the AWW's challenge for next year you may not have bothered with your blog. Or you may have realised that it was a post - JUST LIKE YOUR blog - in response to Tara Moss's rather ordinary statement of statistics that started the whole thing in the first place. The Age book reviewer Cameron (bloke) Woodhead accused Tara of "priviledged whining" for stating the fact that women writers in Australia get fewer reviews than the men. He too then went off on an irrelevant little rave about (paraphrasing) 'perhaps you women should stick to writing about important women's things like domestic violence'. Why? Seriously, why should we? Is that a women-only special topic for some reason? Given it's (usually) men who perpetrate it, why don't they write about it? Oh. Because if they did, it would be important writing and get all the honours. See? Really, it's about as relevant as you talking about Mogadishu. Or Biafra. Eat your dinner little Dmetri/Lindy/Miles Franklin - because you know there are starving children somewhere else in the world. (Post my peas to Biafra then Mum.)
I don't know your writing Dmetri - and you probably have no idea who I am, but you came to this party when it was almost over. And started it again, for the same reason.
Lindy Cameron 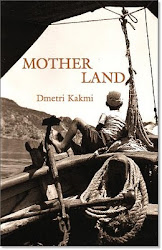 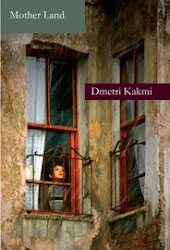 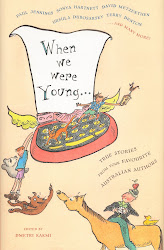 Dmetri Kakmi
I am a writer and editor. My first book 'Mother Land' was published by Giramondo in 2008 and was shortlisted for the New South Wales Premier's Literary Awards. It was also published in England by Eland Publishing and in Turkey by E Yayinlari.

Articles on the web

ALL RIGHTS RESERVED. NO PART OF ANY INFORMATION ON THIS SITE MAY BE REPRODUCED, STORED OR TRANSMITTED WITHOUT PERMISSION OF THE COPYRIGHT OWNER. COPYRIGHT FOR ALL IMAGES REMAINS WITH ORIGINAL COPYRIGHT HOLDERS.