A BLOG OF NEWS AND INSIGHT
Science

Scientist Seeks Connection Between Fire and Ice in Greenland 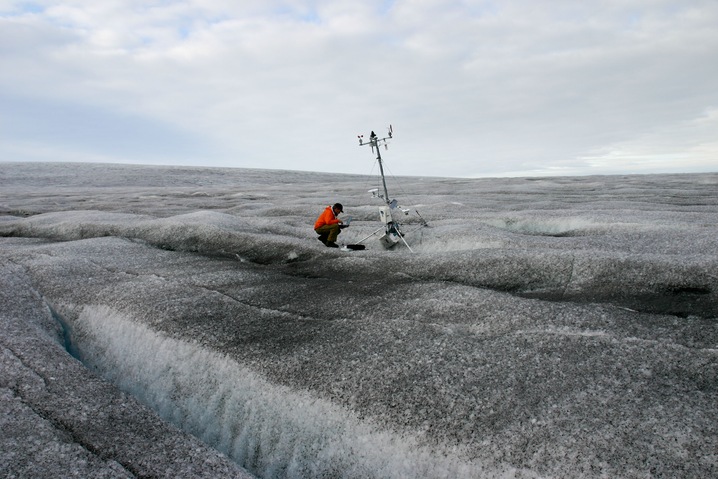 At this part of the ice sheet in Greenland, where the loss of winter snow during each melt season exposes dirty bare ice, the surface reflectivity drops from 85 percent to 30 percent, Box found in one of his studies. Photo by Hugh Balfour Paul.

Are wildfires speeding up ice melt in Greenland? Jason Box, founder of the Dark Snow project, is taking up a collection to find out.

Last summer, record-setting wildfires raged across Colorado and New Mexico. It was the third most devastating wildfire year on record in the U.S. Warmer and drier temperatures in recent decades has also led to increased fire activity in the Arctic tundra. The Anaktuvuk River fire in Alaska in 2007, for example, burned 401 square miles, an area the size of Cape Cod. It was the largest tundra fire ever recorded.

While forests and grasslands burned, the Arctic melted. Greenland’s ice sheet melted at a faster rate than scientists had ever observed, with 90 percent of the mass thawing in July.

Box, who is a Greenland ice climatologist at the Byrd Polar Research Center, thinks there might be a connection between the wildfires and the unprecedented ice melt.

“I was on my way back to Greenland while the fires were going on, and a light bulb went on,” he said. “Soot is a multiplier [of snow melt]…human activity is interacting with Greenland’s climate through fire.”

Box is no stranger to Greenland. He’s made 19 trips to the country since 1994 to study the glaciers. He’s also been involved in the Extreme Ice Survey, a research and photography project that monitors the disappearance of the earth’s glaciers. You can learn more about the Extreme Ice Survey in this NewsHour interview with photographer James Balog:

50982Harsh Weather, Knee Injuries Doesn't Stop "Chasing Ice"James Balog, photographer for the Extreme Ice Survey, has been chasing ice for five years, trying to capture images of the earth's glaciers before they disappear. Hari Sreenivasan interviews Balog about why he continues on this mission.2012-11-29 15:36:00disabled2311159725Bi4GBbNiIlI

Snow’s albedo, or its ability to reflect the sun’s energy back into the atmosphere, controls how quickly the snow will melt. Dust and black carbon particles darken the snow’s surface; the darker surface absorbs more sunlight, which causes the snow to melt faster.

Jeffrey Deems, a research scientist at CIRES who is not involved in the project, said rising temperatures have been well studied as a key factor in Greenland’s ice melt, along with the link between shrinking ice mass and sea level rise. But so far, the impact of soot and ash on snow albedo and how that’s affected accelerated ice melt in Greenland has gotten little attention.

“The big elephant in the room in terms of energy balance is solar radiation,” he said. “Soot and black carbon and mineral dust-affected albedo has an effect on that energy balance.”

Box hopes to drill into the inland ice sheet to examine the black carbon littering the layers of snow, in order to determine where it’s coming from: tundra fires, exhaust from ships or manufacturing dust from the continents, for example.

Layers in the ice are similar to rings in a tree. Each layer corresponds to a distinct year, and the thickness of the ice tells scientist about the rate of melt that year and the health of the ice. For this project, they hope to analyze ice cores from 2012, which had both heavy fires and extreme melt. They’ll compare these core samples to those from earlier years. A lab analysis of the samples should reveal if melt increased around those dark layers, he said.

But a research trip to Greenland is not cheap. Chartering a plane to the island costs $10,000 a day, Box said; more if the weather delays your flight. So when he was turned down for a National Science Foundation Rapid Research grant in 2012, Box launched a social media campaign to encourage public contributions. So far, the Dark Snow project has raised $67,465, which is still short of their $150,000 goal.

Working outside of the conventional grant system has been difficult, Box admitted, and in some ways, it’s very old-fashioned.

“If you think back to Age of Exploration 100-plus years ago, those explorers would do barn-storming tours to raise funding one handshake at a time,” Box said. “Those European explorers did some serious fundraising and they never knew if they would have enough money. We’re doing the Internet Age version. You’re not going to get $100,000 from someone you just met. It’s a long process.”

And crowd funding does come with some advantages. The public learns about the study as the process happens. Any scientist can participate, which gives junior researchers like Ph.D. student MacKenzie Skiles at UCLA, who will be doing the lab analysis of the samples, more recognition for their work. It’s also an opportunity to push the envelope.

“There’s fewer strings and less structure, which gives you an advantage to try edgier and riskier research,” Box said. He sees the Dark Snow Project as a pilot study. If the team succeeds and publishes their findings, Box hopes this will lead to a government grant to fund further research.

Deems said if the Dark Snow project gets off the ground, the findings could help scientists better understand accelerated snow melt in the Rocky Mountains and the Himalayas.

SHARE ON FACEBOOK SHARE ON TWITTER SHARE VIA TEXT
Climate Change Editors' Picks Science Wednesday Stories of the Week Supreme Court TeacherCast
PREVIOUS POST
On the PBS NewsHour Tonight
NEXT POST
Chen Guangcheng: Chinese Government ‘Still Wants to Control Everything’
Are you aware of our comment policy?
PBS NewsHour allows open commenting for all registered users, and encourages discussion amongst you, our audience. However, if a commenter violates our terms of use or abuses the commenting forum, their comment may go into moderation or be removed entirely. We reserve the right to remove posts that do not follow these basic guidelines: comments must be relevant to the topic of the post; may not include profanity, personal attacks or hate speech; may not promote a business or raise money; may not be spam. Anything you post should be your own work. The PBS NewsHour reserves the right to read on the air and/or publish on its website or in any medium now known or unknown the comments or emails that we receive. By submitting comments, you agree to the PBS Terms of Use and Privacy Policy, which include more details.
READ THIS NEXT
5 things you might have missed in the Clinton email report
SUPPORT FOR PBS NEWSHOUR PROVIDED BY

The Rundown offers the NewsHour's unique perspective on the important events of the day with insights from the journalists you trust.

Trump attacks media for questioning his donations to vets

The desperate new migrant drama in the Mediterranean Sea

SUPPORT FOR PBS NEWSHOUR PROVIDED BY