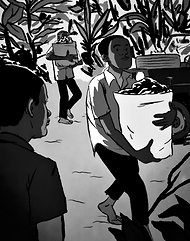 “How Congress Devastated Congo,” by David Aronson (Op-Ed, Aug. 8), suggests that Congress is to blame for the situation in the Democratic Republic of Congo. In fact, the United States government should be commended for its leadership in trying to regulate “conflict minerals” and to starve rebels of the resources and weapons they need to kill and rape.

Although implementation needs better support to prevent human suffering, particularly in a vast, largely lawless country like Congo, the intention of the Dodd-Frank law is admirable. Inaction is not an option. Such due diligence regimes need to be global and strictly carried out.

Companies should continue to invest in Congo, with third-party audits to minimize the risk of trading in “conflict minerals.” Those who do should face consequences from national police and international sanctions regimes. The resources of Congo should benefit the people rather than the rebels, who destroy their lives and livelihoods.

The women I met in eastern Congo want an end to this war. One way is to make the war less profitable.

The writer is the United Nations special representative of the secretary general for sexual violence in conflict.

The long-term development of Congo depends on channeling potentially vast mining revenues into long-term development. At this moment, the mineral wealth of the eastern Congo feeds conflict and corruption, with a few crumbs falling to the local population; almost nothing goes to government coffers.

The “conflict mineral” provisions of the Dodd-Frank financial reform law, which put the burden on companies to know and disclose the source of their supply, are a small but vital step in shifting the incentives away from the warlords. They won’t solve the problem, but their part in “devastating” an already devastated land is overstated.

David Aronson’s impressionistic account of harms and vague reference to the specter of China’s seizing of business don’t justify giving initiative back to the warlords.

The writer, a professor at Columbia Law School, is a consultant to the Carter Center on a project regarding industrial mining in Congo.

David Aronson’s attack on the Dodd-Frank law’s provisions on “conflict minerals” does not tell the full story.

It’s not true that the law amounts to a long-term embargo. Despite alarmist talk of an end to eastern Congo’s minerals sector, major international companies are planning to invest in the areas covered by the law, and initiatives aimed at effective tracing and auditing to clean up the minerals trade are being developed.

Mr. Aronson’s article inadvertently echoes industry rhetoric aimed at delaying the implementation of the law. Any delay would frustrate companies that are trying to do the right thing, undermining efforts to curb a conflict that millions of aid dollars and several peace negotiations have so far failed to stop.

As a Congolese civil-society advocate, I have seen how the Dodd-Frank legislation on “conflict minerals” provides “the leverage needed to instill and impose ethical minerals business practices,” according to a coalition of Congolese human-rights groups.

I have seen how the law has helped lead the Congolese Army to pull out of several mines, and how lowered exports are threatening commanders’ profits.

The law accelerates reforms. Governments and industry are starting a minerals tracing and validation initiative, Motorola Solutions is pioneering a pipeline of conflict-free minerals, and army commanders are being arrested for their role in this trade.

Efforts to end the conflict must also address economic opportunities for mining communities, including alternative livelihoods and support for responsible mining.

A version of this letter appeared in print on August 16, 2011, on page A20 of the New York edition with the headline: A Conflict Over ‘Conflict Minerals’.

Get Free E-mail Alerts on These Topics

Exclusive offers delivered to your inbox