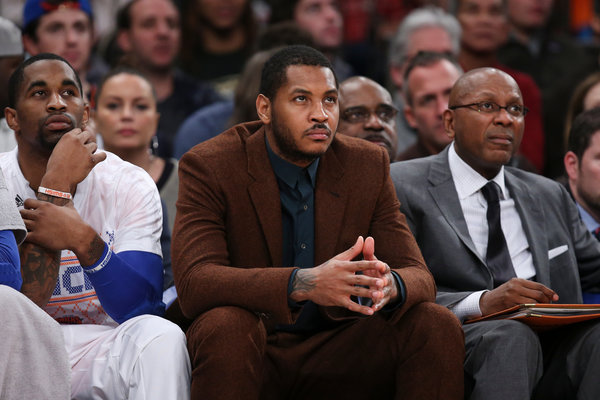 Carmelo Anthony had been out with an injury but started Thursday.

More concerning for Anthony were his psyche and his sprained left ankle, which had shown enough improvement that he started for the Knicks on Thursday night against the San Antonio Spurs. He was not 100 percent, he said — far from it, in fact, after missing three games. But he wanted to play.

“The last couple of days, I’ve felt better,” Anthony said. “Enough where I’m able to run up and down and move the way I’m supposed to be moving.”

The Knicks had four days to prepare for the Spurs, but despite the opportunity to convalesce after a disappointing start to the season, they could not save themselves from themselves. The Knicks lead the N.B.A. in self-inflicted distractions — J. R. Smith’s Twitter account alone would probably crack the league’s top 10 — and the latest example came Tuesday, when Anthony used social media to fire back at a fan who was being critical.

It was a rare episode in which Anthony lost his cool. He faces a constant line of questioning from reporters about losing, about pressure, about his plans to opt out of his contract next summer. But in saving his venom for a teenager on Twitter, he provided the perfect illustration of everything that has gone wrong for the Knicks this season.

The target of Anthony’s ire was Shamar Campbell, 19, a student from Toronto who described himself in a telephone interview as a longtime fan of the Knicks. Campbell said he had attended their game against the Raptors on Saturday at Air Canada Centre while wearing a replica of Anthony’s Oak Hill Academy jersey. The result was yet another loss for the Knicks, who fell to 9-21. Anthony did not make the trip because of his injured ankle.

Like a lot of fans, Campbell said he was bothered by the team’s lackluster play. On Tuesday, he reached his breaking point when he saw that Anthony (or someone from his management team) had posted a message on Twitter that offered holiday greetings while advertising his new Jordan-brand sneakers.

“I was so mad,” Campbell said. “So I tweeted what I tweeted.”

Campbell reached out to Anthony by crafting a 23-word message in which he requested that Anthony “win a ring” because “you always disappoint me.” Campbell peppered the message with obscenities. He did not think Anthony would respond because the gulf between professional athletes and fans, even on social media, tends to be enormous. Anthony seldom interacts with his almost 4.2 million followers on Twitter, although thousands try.

“I guess it was my lucky day,” Campbell said.

Using slang with salacious connotations, Anthony responded to Campbell and wrote that he never asked for Campbell to be his fan. The message quickly circulated online. By Thursday night, it had been retweeted nearly 27,000 times, including once by Smith, Anthony’s teammate, who was apparently amused by it. Campbell said Anthony also blocked him from following him on Twitter.

Campbell said he was playing video games when he learned what had happened: His idol was destroying him on Twitter.

“I think I chose a bad time because he was wishing everybody a happy New Year’s,” Campbell said. “I was telling my auntie: ‘This guy just ruined me! I’m done!’ ”

Soon enough, though, Campbell made the conscious choice to embrace his brush with fame. He gained about 900 followers. His tweet, or at least the family-friendly parts of it, was featured on cable sports highlight shows. His friends were supportive.

“You know, I just decided that I was going to own this,” he said, adding that his allegiance to the Knicks remained unbowed. “I’ve been called worse.”

It has not been the easiest season for Anthony, who said his plan was to play in all three games on the Knicks’ trip through Texas. He entered Thursday leading the league in minutes played per game (39.4). All that work had taken a physical and mental toll, without the wins to show for it.

He was asked if he thought it was fair for fans to blame him for the team’s struggles.

Most of the time, anyway.

A version of this article appears in print on January 3, 2014, on page B8 of the New York edition with the headline: Anthony Hits Roof, Then Hits The Court.

Get Free Email Alerts on These Topics

TicketNetwork is a resale marketplace and is not a box office or venue.

Not quite all spoonfuls of sugar